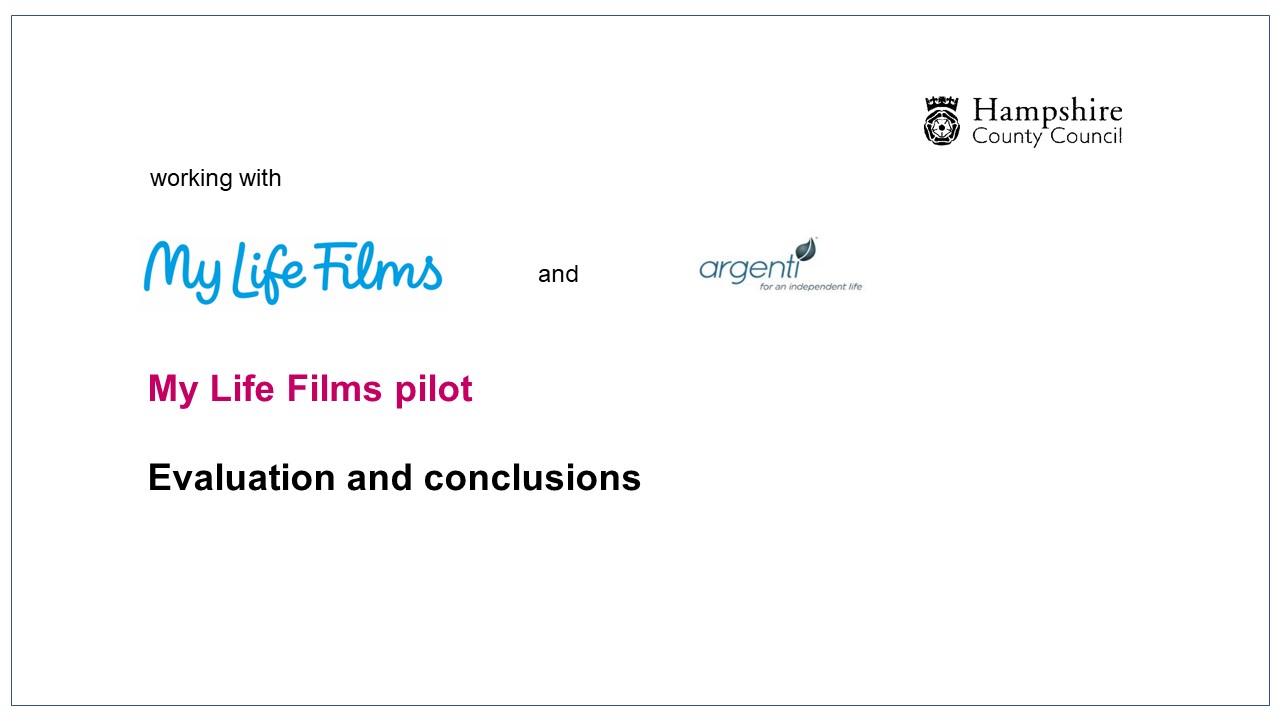 On behalf of Hampshire County Council and as part of the Dementia telecare pathway, Argenti commissioned My Life Films (MLF) to work with eight service users who have dementia to produce life story films for use with their families and carers. The project took place over an eight-month period between January and August 2016.

The film makers worked directly with the participants, their families and friends to identify key moments in their lives, locate photographs and footage to depict these, identify a pertinent musical soundtrack and undertake interviews. Once the footage had been edited, two films
were produced for each participant – a 30-minute biographical film (for use by the family) and a 3-5 minute portrait of the participant (for use by carers). These were shown to the participant and their families at a ‘premiere’ in their homes. Initial reactions during the
premiere were recorded by the film maker.

Following the premiere, each participant and their primary carer were sent a questionnaire to capture their thoughts about the whole process and the final products. Two participants were also selected for a face-to-face interview in their homes. This feedback has been used to inform this report.

Main objectives of the study

The purpose of the life story films produced by My Life Films is to improve the quality of life of and the care received by people living with dementia, as well as providing their loved ones with a lasting memory.

Based on this, the pilot project aimed to:
1. Improve the quality of life of people living with dementia by increasing their wellbeing
and self-esteem;
2. Bring families together, providing them with a lasting memory of their loved one and
reducing isolation of people living with dementia;
3. Support primary care givers by providing them with a tool to calm their loved one,
and to boost their own morale;

A total of two face-to-face interviews were conducted, where both the participant and carer were present. One of these was more successful than the other, with the participant in the first interview appearing confused and contributing little to the responses, whilst their carer provided much of the input.

This led to a lack of solid evidence with regard to the impact of the film on the wellbeing of participants.

Overall, satisfaction with the end product was very high, with all respondents agreeing that the final film is important to them, and 83% saying that it is “very important” to them. All respondents said that they would recommend a My Life Film for other people living with dementia. Positive feedback from carers and participants included comments such as: “a wonderful experience”; “the film has given us a great deal of pleasure”; “[the] final product is a lovely and emotional film which we will treasure forever”; “it is a very worthwhile product for people living with dementia and their carer”; “the DVD is very precious to me”.

Respondents view the film with varying frequency, with ‘2-3 times per month’ and ‘2-3 times per week’ being the most common. The lower frequency viewers stated that there were some technical issues with regard to the film not playing on certain DVD players, and with regard to certain participants not being able to operate a DVD player without assistance, thereby reducing the frequency with which the film was viewed.

The films were very positively received by participants and carers alike, and there is no doubt of their value to people in terms of the joy and happiness that they bring. As mentioned by some carers, they are a useful record of the participant’s life and will be a treasured possession when this person is no longer in their lives.